Home Blog DO WE REALLY NEED TO DRINK MILK?

DO WE REALLY NEED TO DRINK MILK? 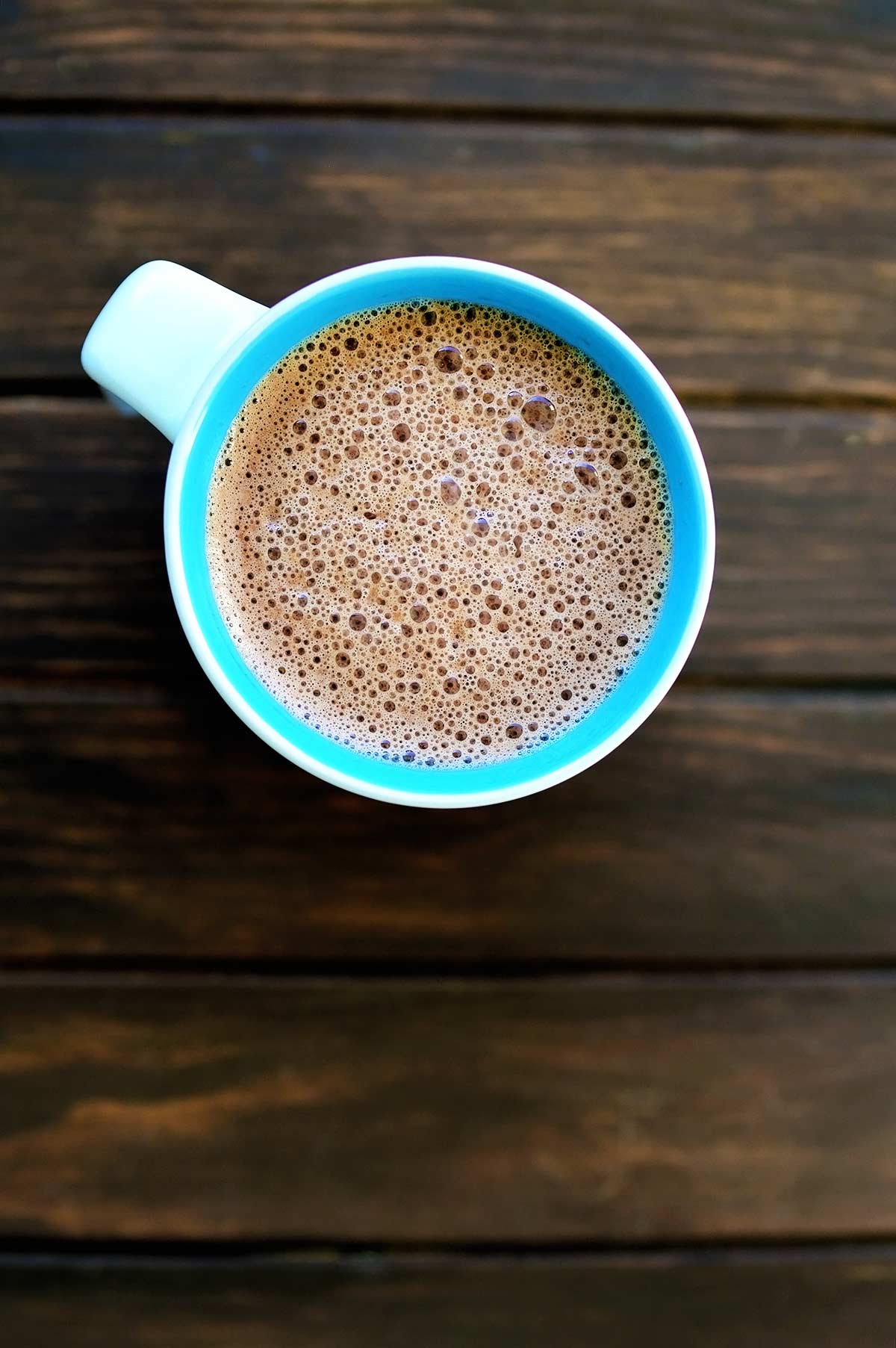 Hot chocolate made with almond milk

During all our lives we have been “pushed” to drink animal milk. You need calcium for strong bones and therefore you need to drink milk because it “has a lot of calcium”. Even some doctors will recommend their patients a certain amount of servings of dairy a day. But, have you ever stopped to thinK why? Which other animal keeps drinking milk after the lactation period? And not only that but also drinking the milk from another specie? It just doesn´t make any sense and this is why:

Cow’s milk is 50% fat, providing 600 “growth-supporting” calories per liter. Cow’s milk also has high concentrations of protein, potassium, sodium, calcium, and other nutrients to sustain rapid growth. In comparison, these nutrients are at a three to four times lower concentration in human milk than cow’s milk. So as you see, cow´s milk nutrient concentration differs pretty much from our mothers´s milk.

In addition to this, cow´s milk contains hormones that stimulate the growth of the calf. The most powerful one is the IGF-1 (insulin-like growth factor-1). Dairy consumption in humans also increase IGF-1 levels. You might think that stimulating growth might be a good thing but actually it´s not. IGF-1 also promotes undesirable growth like cancer/tumor growth and premature aging.

Dairy products are high in calories, high in fat and in saturated fat, high in cholesterol, high acidic, high in protein and they have zero fiber. Due to all these, dairy is related to many diseases such as obesity, diabetes, heart disease, acne, cancer, kidney damage, osteoporosis and parkinson just to name some.

Let´s take a close look to what the science says about milk consumption and its relation to many of the common diseases of our society.

First of all, what does acid-forming mean? Acid and alkaline levels are measured on a PH scale. PH levels fall when acidity increases while an increase in alkaline causes PH levels to rise. Healthy PH levels in the blood are slightly alkaline. Therefore when we eat acid-forming foods we are increasing acidity which means a decrease in PH levels, putting the body in an “acidic state”. And how does the body buffer this acidity? By pulling calcium out of your bones and teeth.

Animal products are high in sulfur-containing amino-acids (up to 5 times more than grains and beans). So every time you eat animal products, you´re pulling a considerable amount of calcium from your bones which will finally end up in your urine.

The National Dairy Council states: “Excess dietary protein, particularly purified proteins, increases urinary calcium excretion. This calcium loss could potentially cause negative calcium balance, leading to bone loss and osteoporosis. These effects have been attributed to an increased endogenous acid load created by the metabolism of protein, which requires neutralization by alkaline salts of calcium from bone.” 1

There are many healthy alternatives to milk. Oat, rice, hemp, soy, almond milk…The options are endless. You can even make your own. 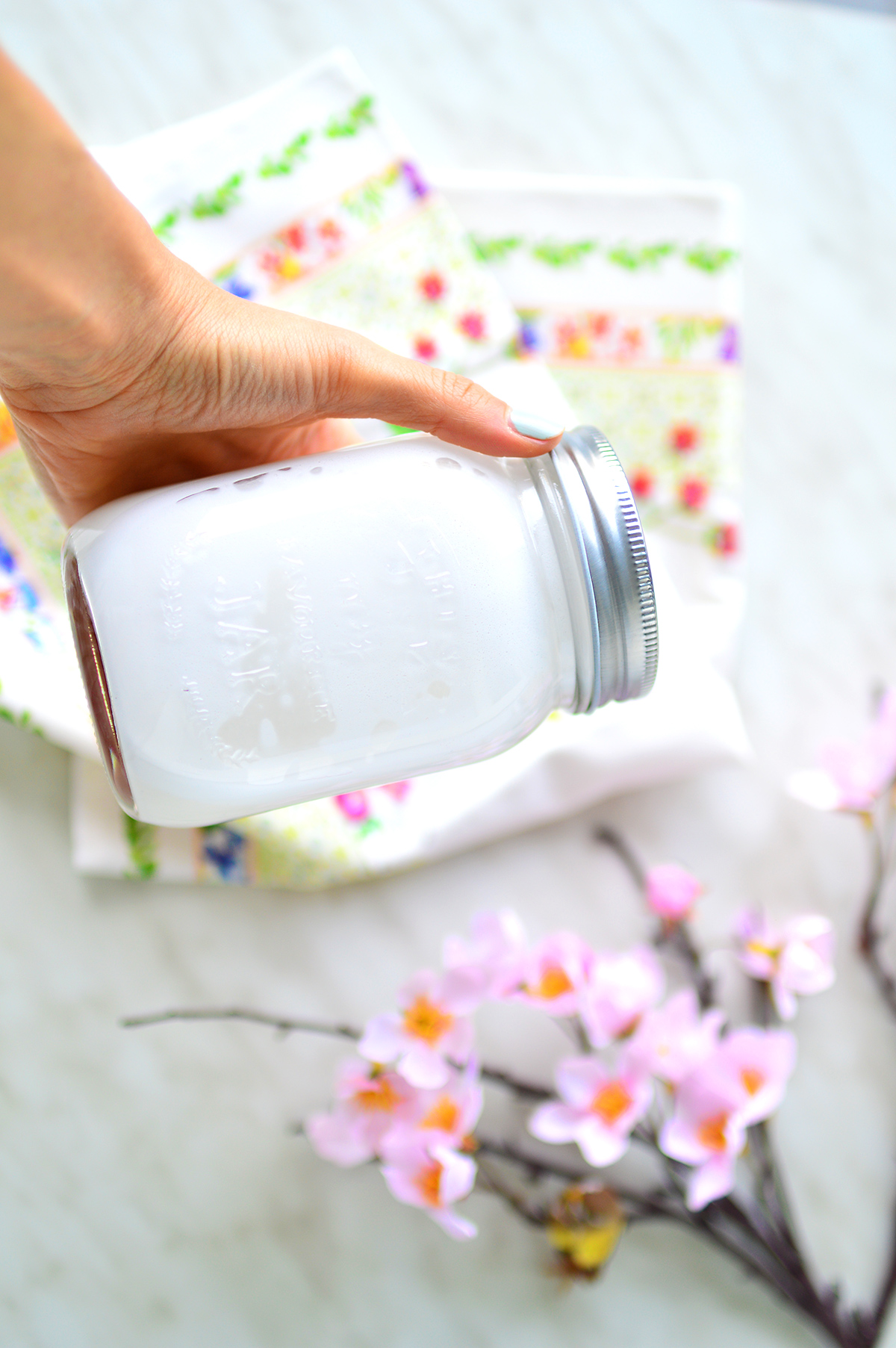 The consumption of dairy products raises levels of IGF-1 (insulin-like growth factor I) in the bloodstream which is known to promote cancer cell growth. High levels of IGF-1 have been linked to increased risk of breast cancer and prostate cancer.

Furthermore, although the body needs a certain amount of calcium, too high levels of calcium result in a lowering of activated vitamin D in the blood. Vitamin D is known to be protective against prostate cancer so therefore a high intake of dairy products may have harmful effects.

Recent scientific studies that examine the relationship between dairy products intake and ovarian cancer risk found that from every 10 grams of galactose consumed (which is approximately the amount in only one glass of milk), ovarian cancer risk increased by 13 percent. 5 6

You can find vegan spreads that won´t raise IGF-1 levels. Or even better, for a non-processed vegan spread, try making it at home!

Parkinson’s is a dopamine deficiency disease due to loss of dopamine-producing brain cells. When this neurotransmitter is not produced in enough quantities it affects the nerves and the muscles in charge of controlling coordination and movement, which are the major symptoms characteristic of Parkinson´s disease among others.

Animal products block the transport of L-dopa (a compound derived from an aminoacid in our diet) to the brain. This is why researchers tried at first the called “protein redistribution diet” where the patients would only eat meat at night so that they are sleeping by the time the negative effects of the animal protein strike. 7

Studies analyzing the relationship between dairy products and Parkinson’s disease found that the consumption of milk in midlife was associated with subsequent development of PD. 8

Dairy consumption is associated with higher risks of Parkinson due to the contamination of dairy products with neurotoxin chemicals. Tetrahydroisoquinoline, which is a toxin related to Parkinson, is predominantly found in cheese.

Later on, researchers found out that the consumption of fiber naturally boosts level of L-dopa. Different studies suggest that a plant-based diet may prevent Parkinson due to the high-fiber and protective phytonutrients content in certain plant-foods.

The exposure to pesticides and insecticides causes Parkinson’s disease due to the damage of the brain’s cells. Foods higher on the food chain (meaning animal foods), have the highest levels of pesticides. Estimates are that 89% to 99% of the chemical intake into our body is from our food, and most of this is from foods high on the food chain: meat, poultry, eggs, fish, and dairy products.

Fish and other marine life are especially strong sources of brain-damaging chemicals like polychlorinated biphenyls (PCBs) and methylmercury (MeHg).

Creamy Sauce made with Soy Yogurt

Although many doctors say that diet has nothing to do with acne the reality is that a few studies proved otherwise: diet causes and aggravates the severity of acne since animal proteins stimulate IGF-1 levels in the body.

Milk consumption and acne in adolescent girls by Clement Adebamowo in the May 2006 issue of Dermatology Online Journal found after studying 6,094 girls, aged 9 to 15, that those consuming two or more glasses of milk daily compared to girls consuming less than one glass, had 20% to 30% more acne. 9

In this research, low-fat milk was involved, which suggested that it was not the fat, but something else, which caused the pimples. They proposed that the protein in milk causes a rise of IGF-1(Insulin-like Growth Factor-1 ) a powerful growth hormone, which stimulates acne production. Androgens (male hormons) are linked to acne and these hormones also increase with the consumption of dairy products.

Cholesterol is a white, thick substance that is found only in animals (plants do not contain any cholesterol). It is essential for certain functions in the body but we do not need it in our diet since our body already produces its own. However, people usually eat a diet high in cholesterol due to the presence of animal products in their diet.

One of the most important things to vascular health is the endothelium, the innermost linninf of all vessels and the heart. The endothelium cells are in charge of producing nitric oxide molecules which is a vasodilator, meaning, it keeps blood flowing and it causes the blood vessels to dilate or enlarge on demand. And, what causes nitric oxide to fail? Excess fat in our diet. Every time we eat animal products such as meat, fish and dairy (as well as oils) our endothelial cells are injured and nitric oxide levels depleted. When the levels of nitric dioxide fall, the endothelium tissues become sticky which allows cholesterol to dig into the vessel wall, leading to blockages that linders blood flow. The continued damage to these fragile cells (endothelium) leads to plaque blockages, heart attacks, strokes and therefore, the need for bypass surgery and stents. 10 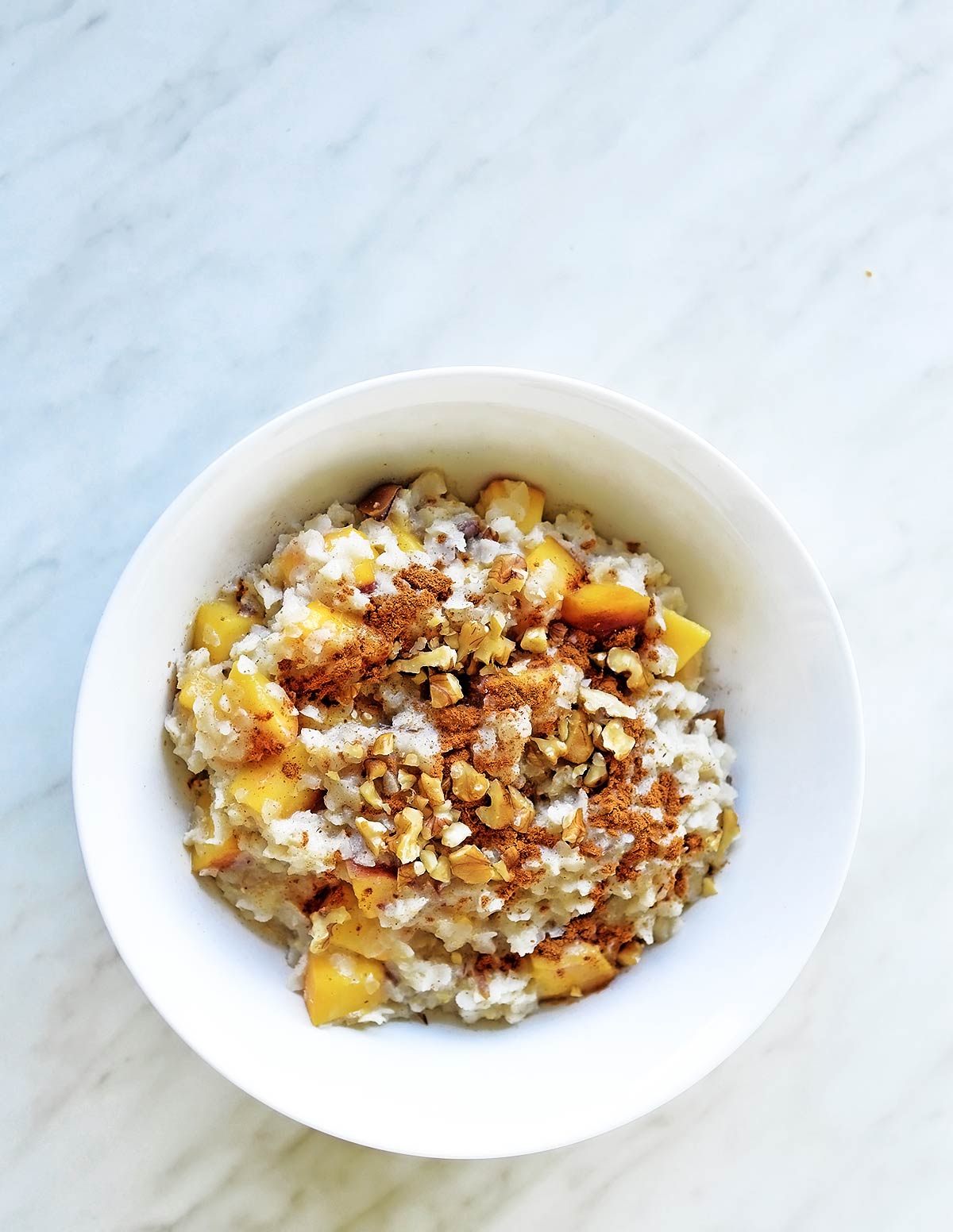 Creamy porridge made with soy milk

Subscribe to my newsletter and get a free recipe ebook! 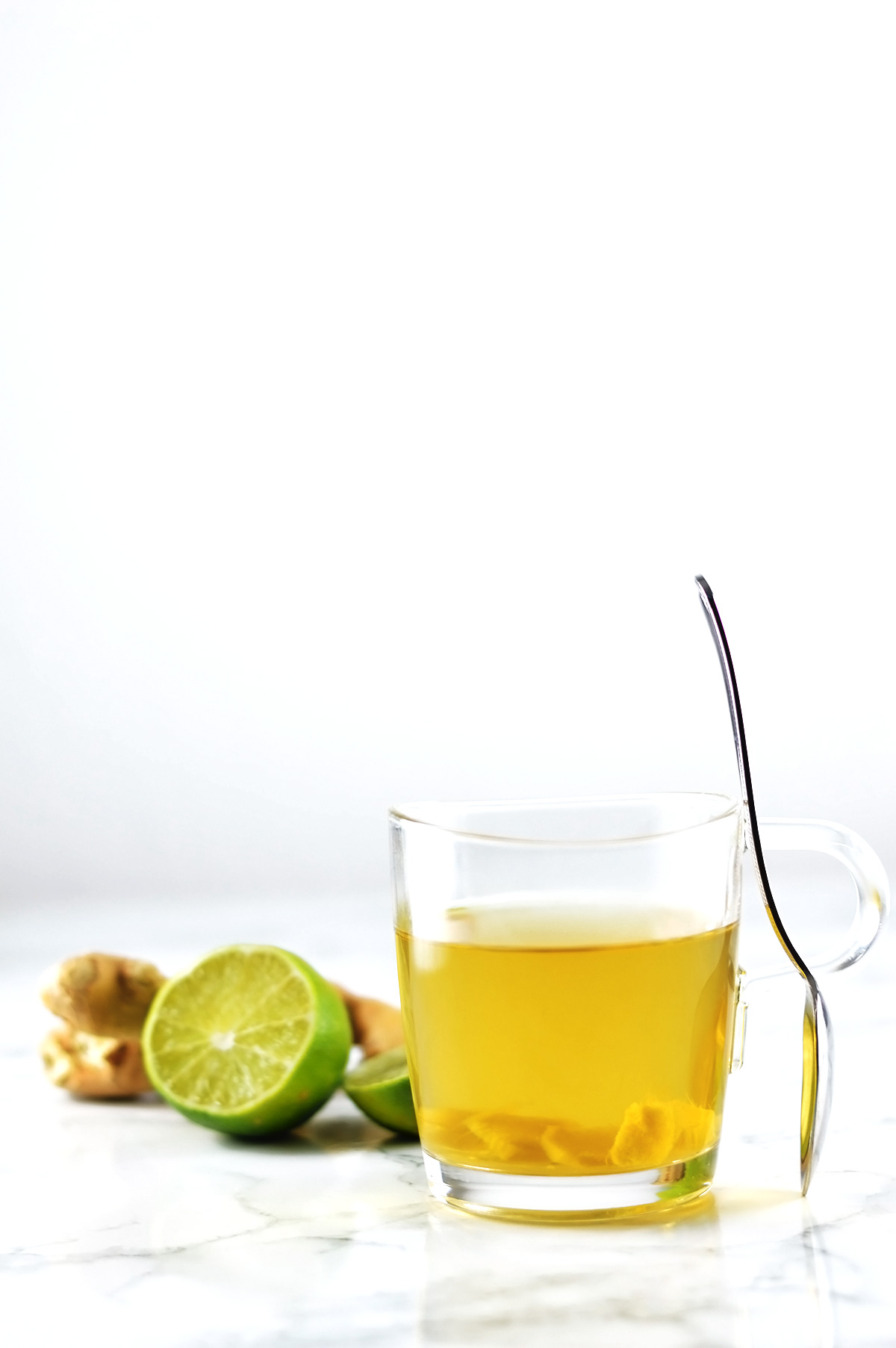 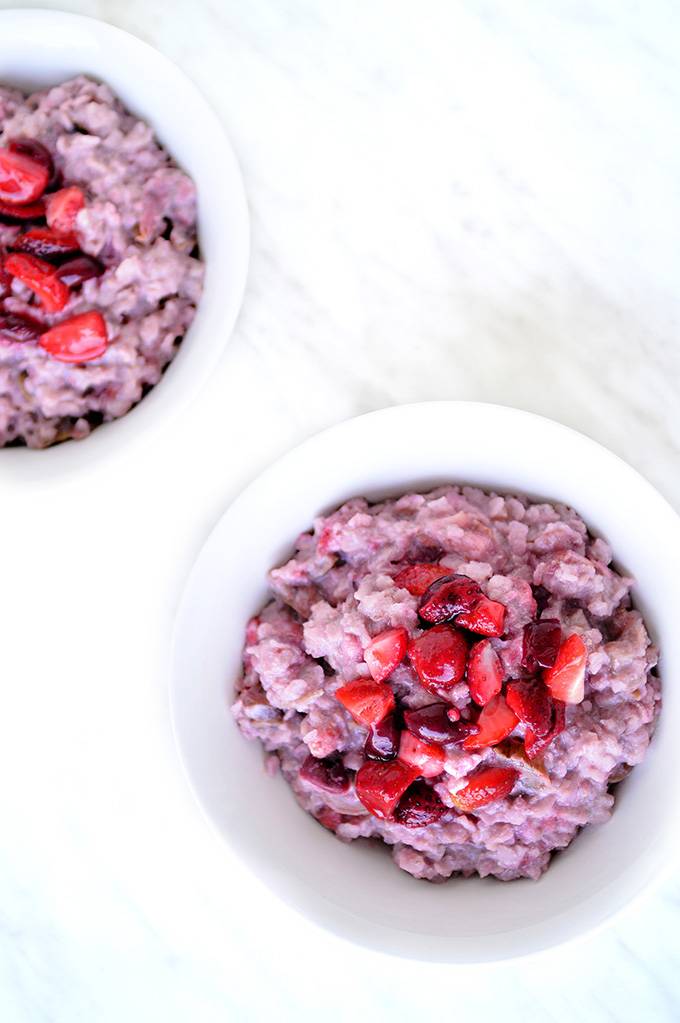 What do we do with your data? At thebrightbird.com we ask for your name and email (we do not publish the email) to identify you among the rest of the people who comment on the blog. 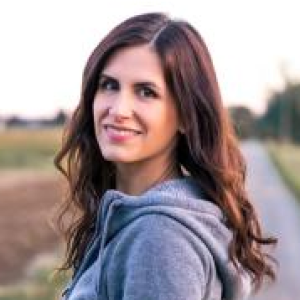 Hi there!
My name is Sonia, welcome to my website! Here you´ll find recipes and posts about healthy eating and lifestyle. I follow a whole-foods, plant-based, oil-free and vegan diet and I hope I can inspire you to jump on this train and enjoy this lifestyle just as much as I do.
I´m an architect, photography enthusiast and Master Nutrition Student with a passion for food, nutrition and overall health. 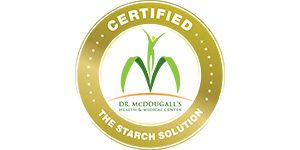